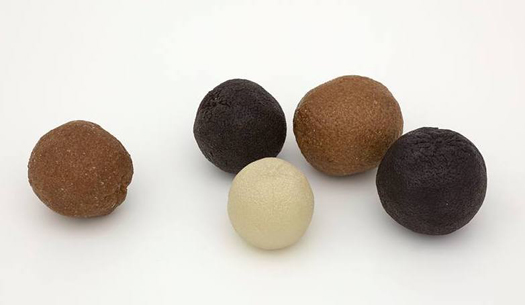 The project is arranged as an evocation of three particular geographical places around Madrid: the neighbourhoods of Vallecas, Las Tablas and the historical Monastery of El Escorial referring to the ideas of Popular, Corporate and History. At the same time Bestué moves between different sculpture techniques, shapes and materials.

Laser cuttings on metal and plexyglas allow him to get near the cold and apparently impersonal aesthetics of economical power. The aseptic of a certain idea of modernity and future contrast with the use of resins that, when moulded, give the artist the chance to encapsulate the intangible values of popular and local culture. Finally, by adding in his Works pre existing artefacts and elements he is able to evoke Memory, History and Tradition in an apparently free and careless manner but at the same time ironic and deeply subtle.

At the end of the show a bench and a lamp allows the visitor to contemplate a number of oranges scattered over the floor.

Outside of the museum building another work, 00:00, talks about Time activating at a certain moment during the day.

David Bestué studied at the School of Fine Arts in Barcelona. He has done solo shows at La Capella in Barcelona, Gasworks in London and at the Arkitekturmuseet in Stockholm, at Sala Montcada and MNAC in Barcelona.