Francesc Ruiz at the Göteborg Biennial 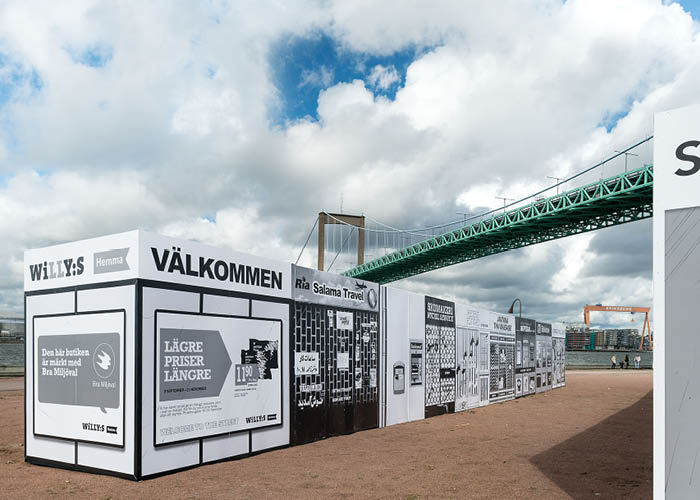 Francesc Ruiz has undertaken extensive research into the history of comic books, particularly in relation to issues of subculture, social class and sexuality in different cultural contexts.

For this new project titled The Street, Ruiz has been interested in creating narratives that imagine a commercial street as a comic in which every shop window acts as one panel of a comic strip. He has taken inspiration from an actual comic called Danny the Street from the DC Universe, in which the main protagonist is actually the multiplicity of a street, named Danny, rather than an individual person. In the original comic, Danny is male and cross-dresses. His footpaths are lined with various hyper-masculine stores, such as gun shops and sporting goods, which are decorated with frilly pink curtains and lace. While Danny cannot speak in any normal sense, he communicates via such means as signs in windows, type-written messages and letters formed out of broken glass shards. He speaks Polari, a largely antiquated form of slang spoken predominantly among gay subcultures in Britain.

For The Street, Ruiz has created an actual street façade based on his drawings. The Street seeks to portray the polyphony that can be discovered in many suburban centres in cosmopolitan cities. Places where we might see for example the halal butcher next to the charity shop, next to the Jehovah’s Witness centre, next to the Thai restaurant, next to the sex shop, next to the library, next to the church, next to the office of a political party, etc. But in the work, we will also see hints of the desires, aspirations and socio-economic realities that lie behind these surfaces. The Street considers the subject of cohabitation that is the central idea of a secular society.